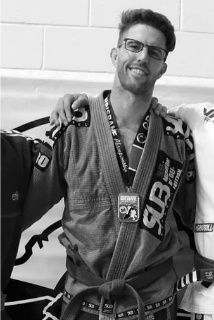 Biography:
Married with two cats and an insatiable urge for travel and adventure. He has been a jack of all trades, finally learning to master some. He moved around every two years growing up in an army family, changing schools and countries often. He worked in a variety of different industries from Army reservist to fine dining catering for some of the biggest political and business leaders in Australia to finally settling on a trade in the communications industry. He works to finance his ever growing list of passions and wouldnt have it any other way.

Don’t believe everything you think.

Describe Your BJJ Game: Gentleman-Jiu-Jitsu. I play a more 'catch' style of BJJ, pressuring the opponent with constant threats to force a mistake then capitalising.

Benicio Murray is available for private training sessions for the following rates:

Get in Touch with Benicio Murray